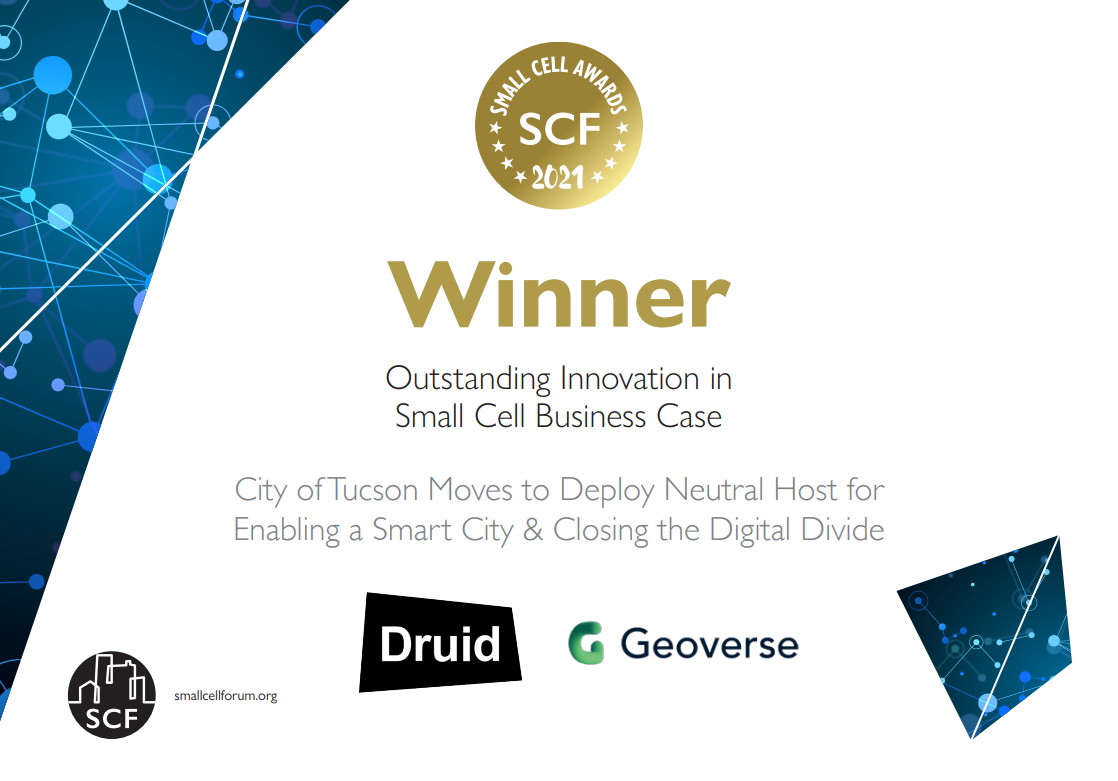 We are delighted to announce that we are a 2021 SCF Award Winner! Along with our partners Geoverse, we won the outstanding Innovation in Small Cell Business Case award for deployment in the City of Tucson.

Tucson CIO Collin Boyce realized about a year ago that his city was not ready for the online lifestyle that was coming with COVID. “32% of Tucsonians did not have high-speed internet connectivity,” Boyce said. “I approached the assistant city manager, and we had this conversation about doing wireless.”

Boyce wanted to invest in wireless because he knew the city couldn’t afford to connect everyone with fiber. But Wi-Fi also seemed too costly. Boyce figured he would need 7,000 access points for the 20-square-mile area he needed to cover. A friend encouraged him to look at LTE, and Boyce started researching providers online.

The CBRS network, which uses General Authorized Access spectrum, consists of 40 JMA radio nodes connected to off-the-shelf servers that run JMA’s XRAN baseband software. A typical node has one JMA 5-watt CellHub radio, connected by jumpers to one or more antennas. Fiber connects the radios to the server locations. Fiber also connects the baseband servers to the Druid Raemis core network, supplied by Geoverse. The core connects to Google’s Spectrum Access System, which negotiates the availability of the shared CBRS spectrum. The municipal network will enable remote learning and multiple smart city applications in the first phase and new use cases and applications in follow-on phases.

Chair of Judges, Caroline Gabriel, said “Neutral host models are central to the ability to deploy small cells at scale, in an economically viable way. The judges thought this was an outstanding example of how that model can be applied in an innovative way to drive significant results for the deployer, the city and the poorest communities”.

At the heart of the network, the City has deployed the Geoverse GeoCore Druid Raemis Evolved Packet Core (EPC) as the critical control element to manage all the CBRS radio network infrastructure from JMA Wireless, the Spectrum Access Service (SAS) from Google, and the many user devices. All these mobile devices and end points will be populated with a Geoverse SIM card so that they can securely connect to the Druid Raemis private network and utilize its capabilities such as roaming if they travel off-net. The city’s Raemis private network is one of the largest municipal cellular deployments rolled out so far in the US.

Radios are mounted on towers that the city was already using for public safety applications, as well as on city-owned rooftops. In addition, 13 poles were installed specifically for the CBRS radios. Tilson is handling site construction and deployment, and the entire network rollout is overseen by integrator Insight Enterprises.

Tucson uses software to determine which residents are eligible to receive gateways and CBRS SIM cards to enable them to access the network. City residents can log in to a website to see if they qualify. Insight provides support to qualified users who have problems connecting, bringing in Tilson and Geoverse to help as needed.

According to Boyce, the network is delivering 50 Mbps downstream at his house, which isn’t even in the prescribed coverage area, and people who live closer to the towers are getting faster speeds. Boyce added that network policies block Netflix, Hulu, and content that is not considered appropriate for minors.

In addition, the GeoCore Druid Raemis core allows for network slicing across the cellular network, resulting in multiple virtual networks that can each be dedicated to specific functions to help better manage a number of city infrastructure domains. This includes connecting the city’s network of traffic lights, monitoring and managing its critical water systems, serving city parks and recreational spaces with public Wi-Fi, and connecting the city’s community of highly critical first responders. It will even be the platform to offer its city staff low cost, high performance internet service.

“The resulting CBRS infrastructure footprint and related deployment resources required were significantly much more manageable and therefore more cost-effective, which was significant understanding the tight schedule and limited resources we were managing against.” commented Collin Boyce the CIO from the City of Tucson.

See the full list of award shortlists and winners here.